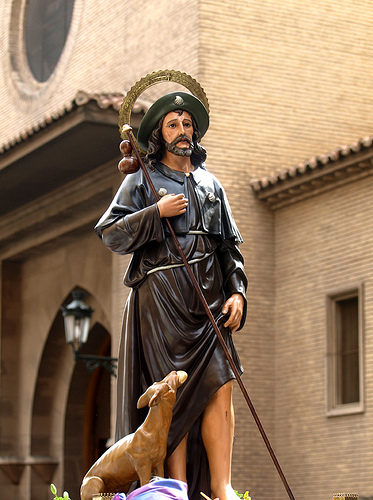 The pilgrimage to glory has gone a long, long way from the old ‘visita’ 25 years ago.

Through the efforts of early lay leaders like Choleng Cruz-Nonato, they were able to locate a new site for the visita at the corner of Alchan and Wayan Streets, which was a stone’s throw away from its old location at S. Cruz Street before the Second World War. As part of San Felipe Neri, the Catholics of Barrio Barangka had a strong devotion to San Roque. Devotion to the Blessed Mother was promoted by the Legion of Mary Praesidium Causa Nostrae Lastitlae was founded in 1966. At the time the young lay, Dan Sta. Maria, was president of Rizal Curiae of the Legion; eventually he would become the parish priest. The Christian Family Movement (Unit II) was organized next with the help of Mr. and Mrs. Doming Angeles from San Felipe Neri. The primary goal of these organizations, besides spiritual formation and community involvement, was a special project: a need for a better and bigger chapel in place of the existing visita in Alchan and Wayan Streets. Thus the CFMers were motivated to look for an adequate and permanent site for a future parish church site.

Among the members of the CFM II were employees of Insular Life. Aware that a large portion of Mandaluyong, including Barrangka, was owned and developed by the Ortigas family. CFM II members Atty. Ninoy Cendena Jr., Mr. Vicente Lizardo with the help of Mr. Doming Cera, all employees of Insular Life, approached the company president, Mr. Jose Olbes who was a close relative of the Ortigas family for assistance. With the help of Mr. Olbes, the real estate company was ready to donate a portion area which is now the Mandaluyong City Hall Center but they had to decline the offer because the area is not in Barrangka. Another piece of land was offered in the heart of Barrangka Ilaya, which is now the present site of San Roque Parish. In 1967, after initial donations were given, diggings around the perimeter of the lot began and the foundation of the concrete walls were established. The laying of the cornerstone was done by Fr. Anastacio Gapac, assistant parish priest of San Felipe Neri. Building materials such as roof sheets, hollow blocks and cement were given by generous donors. Pews from San Felipe Neri served as seats, unsteadily set down on the uneven flooring of earth and gravel. As for the altar, an improvised wooden table was used and it indeed served its purpose. The first mass was celebrated by Fr. Pantaleon de Guzman, parish priest of San Felipe Neri, on the feast day of San Roque, August 16 1968.

In 1970, Fr. Emmanuel Sunga (now Monsignor) who was then the Assistant Catholic Chaplain of the University of the Philippines and chaplain of the CFM II informed the association that Cardinal Santos would be extending financial assistance to the proposed parish. A delegation composed of Msgr. Sunga, Choleng Cruz-Nonato, Atty. Cendena and Mr. Pajaro received cordially and commended by the Cardinal for their perserverance and diligence in pursuing the construction of the chapel despite difficulties.

On April 14 1971, the church was consecrated by His Eminence Rufino Cardinal Santos, on the following day, Auxiliary Bishop of Manila, Hernando Antiporda administered the oath of office to Rev. Fr. Emmanuel Sunga as the first parish priest. On the same year, during the feast day of the Patron, His Eminence officiated at the Mass and consecrated the altar table, tabernacle, the bronze crucifix, the baptismal font and the Stations of the Cross. All these items were designed and carved by National Artist Dean Napoleon Abueva of the University of the Philippines, College of Fine Arts. The altar table is made of marble shipped from Romblon and mounted on an equally meaningful stand, the crown of thorns; this was also crafted by Dean Abueva.

In 1989, Fr. Daniel Sta. Ana returned to San Roque Parish as the parish priest. The construction of a Parish Center was planned to cater to the physical, social, economic and spiritual needs of the people. The idea was to make the church a multi-purpose building with facilities such a library, seminar halls, crypt, fishponds, function rooms, dormitories canteen and offices. Plans including the construction of a youth center with a convertible court and performance stage. The project also aimed re restructure and remodel of the existing church structure.

On March 28 1992, His Eminence Jaime Cardinal Sin led the ground breaking ceremony for the church construction together with Fr. Sta. Maria. The funding for the construction was enormous but the parishioners, full of enthusiasm participated to raise funds. Phase 1 of the construction finished in 1996, and soon Phase 2 began. It included the 5-storey building at the back of the altar with the rectory, part of the formation center, and a concrete roof deck for two big overhead tanks and an underground reservoir.

Throughout the period, the parish remained active, still holding masses and the usual activities. In April 1998, the Santuario de los Santos Crypt for cremated remains was inaugurated and blessed. Around this time, the San Roque Parish Foundation were established to managed the center.

In 1999, Monsignor Manuel Sebastian took over and made a few minor changes to the original plans. Three years later, Monsignor Jaime Zurbano came and continued with the construction. During his time as parish priest, he proposed the rehabilitation of existing parts of the church. He also moved the improvement of the basement area by making improvements to the crypt which became a major source of funding and constructing the Sacred Heart of Jesus Chapel and starting the Mortuary.

Current parish priest, Fr. Andy Ortega Lim came in September 2005. He reviewed the status of the construction and existing plans and after a year of putting order and systems in place, he continued the unfurnished projects of his predecessors starting September 2006. With the goal of finishing the church quickly for the people, he devised a more organized and specific plan. By launching and organizing the Handog Pag-ibig: Tithing for Construction Program, he was able to encourage the people to support the ongoing construction. With the money collected from the program, various donations from the very generous friends of San Roque, and income from the crypt and mortuary, Fr. Andy moved for the speedy completion of the plans.

After 18 long years, the new church was dedicated on September 18 2010. On February 5 2011 the ground breaking ceremony for the multi-purposed center was led by His Eminence Gaudencio Cardinal Rosales and was blessed on December 22 2012 by his successor, His Eminence Luis Antonio Cardinal Tagle.