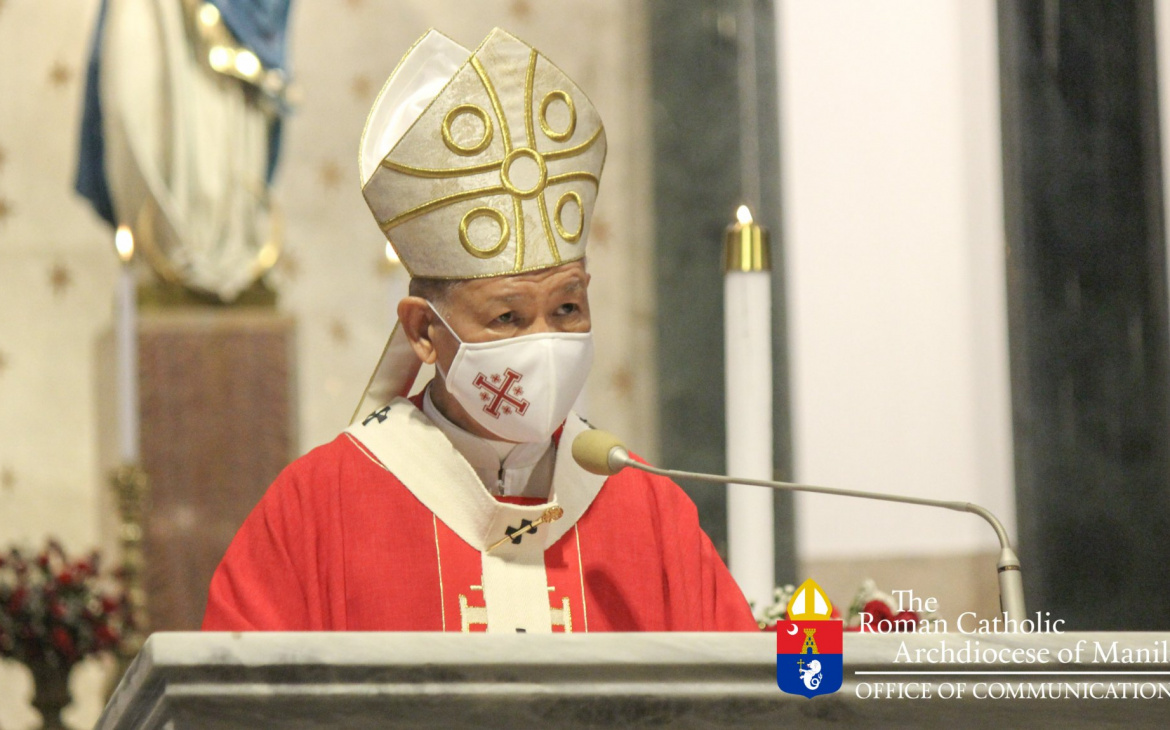 His Excellency Most Reverend Charles Brown, Apostolic Nuncio to the Philippines; Their Excellencies Most Reverend Bishops present; His Excellency Ambassador Jose Cuisia; brother priests, members of the Equestrian Order of the Holy Sepulchre; dearly beloved in Christ,

Farewells and goodbyes are always difficult and painful.  When we love someone, we give a part of ourselves to the beloved.  The void and the space left behind because of parting as if becomes an aching and gaping wound. The deeper the love, the greater the agony and anguish we experience in parting.  The disciples are beginning to be anxious about their impending separation from Jesus.  They have experienced this when they abandoned him during his passion.  They have experienced devastating separation from Jesus.  How will life be without Jesus?

Jesus loves his disciples so much that he assures them of his abiding presence in their lives and mission.  He uses the image of the relationship between the vine and the branches, a relationship of abiding, pruning and bearing fruit.

Abiding.  “Remain in me as I remain you.  Just as the branch cannot bear fruit on its own unless it remains on the vine, so neither can you unless you remain in me.”  Jesus initiated a deep sense of connectedness with his disciples.  This is a connectedness from which they drew great strength.  At one point, Jesus even promised his disciples “I will be with you until the end of time.”

A Jesuit author once wrote: “The autumns of our lives remind us to cling to the Lord, and more than ever, to rely on Him. It is an often-forgotten truth because of the leaves, flowers, fruits, and nests that often clutter our lives. We are just the branch, but our Lord Jesus – He is the tree,” he is the vine.

St. Teresa of Avila tells the story of one of her religious experiences involving the Christ Child himself.  According to the story, one day at the convent she meets a mysterious child coming down the stairs. The child stops in his tracks and asks her who she is.  “Teresa of Jesus,” she replies before asking, “And who are you?”  The child looks at her and says, “I am Jesus of Teresa.”

Pruning.  “Everyone that bears fruit he prunes so that it bears more fruit.”  Jesus points out the value and necessity of pruning even the choicest of vines.  Pruning involves “removing a plant’s suckers which too often drain off important vitality and limit the vine’s ability to produce abundant fruit.”  Whatever is not life-giving and mission-serving  needs to be pruned.  But pruning is always painful.  Like a potter, the Lord sands the rough edges to produce a magnificent work of art.  There must be pruning of our selfish ways, sinful inclinations and arrogant behavior.  Parents do this to their children.  Teachers do this to their students.  Masters do this to their disciples.  Pruning is always an act of love.

Bearing Fruit.  “I am the vine, you are the branches.  Whoever remains in me and I in him will bear much fruit because without me you can do nothing.”  A testament to the fidelity of the branches to the vine is bearing fruit.  Last Sunday, Jesus said to his friends, “They will know that you are my disciples by your love for one another.”  Indeed, the early Christian community’s fidelity to listening to God’s Word, to the breaking of the bread, to prayer and to fellowship yielded compassion to the needy.  Christians we ready to sell their possessions in order to respond to the needs of the poor.  Stephen, the first martyr, inspired many with his act of forgiveness while he was being persecuted in imitation of the Lord Jesus.

It is with a deep sense of gratitude that I join you this morning on the occasion of my investiture as Grand Prior of Equestrian Order of the Holy Sepulchre.

Every Holy Saturday morning, the Church keeps vigil at the tomb of Christ.  We reflect on one of the shortest lines in the Creed, “he descended into hell.”  Christ descended into the abode of the dead.  For the Greeks and the Jews, death is entering the place of extreme loneliness, isolation and separation.

Jesus descends into the Sheol, the Hades, the abode of the dead not as a mighty superhero or a powerful king.  He goes into the abode of loneliness, isolation and separation as someone who has just experienced being abandoned by his disciples, rejected by people.  On the cross, he cried out “My God, my God, why have you forsaken me.”  He also entered the experience of ultimate isolation – death.  That is why the sepulchre, the tomb is a reminder of this act of solidarity, of communion.

Realizing this, we can really pray, “Lord, I know you are near.  Where can I run from your love? If I climb to the heavens you are there. If I fly to the sunrise or sail beyond the sea, still I’d find you there.”

Cardinal Tagle once shared his reflections on Christ’s experience of death: “What we do not want to enter – that moment of extreme loneliness, isolation, separation – now becomes a moment of Jesus’ communion. I will not leave you alone. I have died for you. And every person who dies will never be alone. And we say that – he went to the place of the dead. The place of isolation has become a place of communion. Who can separate us from Christ? No one. Because Christ refuses to leave us alone even in death.”

Let us pray the we too, members of the Order, may learn communion and solidarity as our way of life, as our constant opportunity to be like Jesus and to love like Jesus.  Amen. (Photo by Rian Francis Salamat/RCAM-AOC) 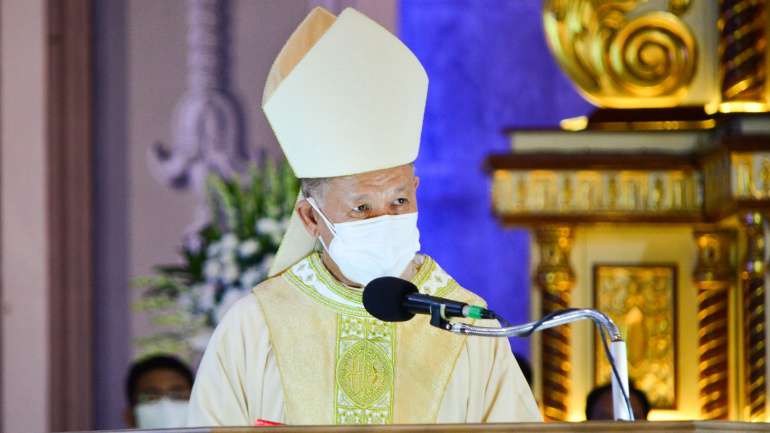 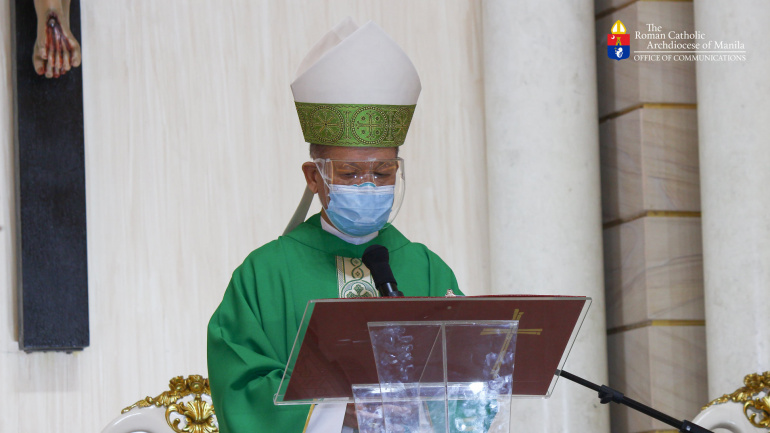 FULL TEXT | Homily delivered by Manila Archbishop Jose F. Cardinal Advincula during the Closing Mass of PCNE 8 Series 2 at the Chapel of the Eucharistic Lord on October 24, 2021, World Mission Sunday.

FULL TEXT | Homily delivered by Manila Archbishop Jose F. Cardinal Advincula during the Closing Mass of PCNE 8 Series 2 at the Chapel of the Eucharistic Lord on October 24, 2021, World Mission Sunday.

Reverend Msgr. Esteban Lo, LRMS, Chaplain of the Chapel of the Eucharistic Lord here in SM Megamall and National Director of the Pontifical Mission Society, brother priests concelebrating in the Mass, dear deacons, seminarians, brothers and sisters in the…