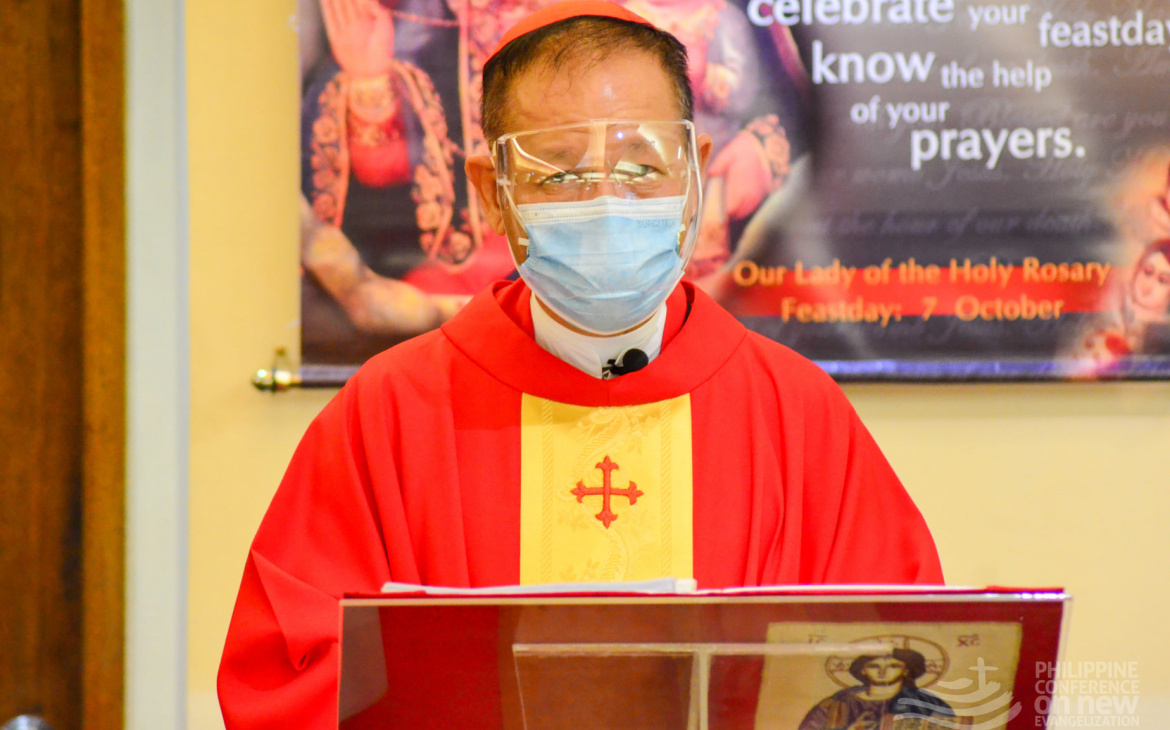 Reverend monsignor and fathers, reverend sisters and brothers, my dear people of God in the Archdiocese of Manila, may the celebration of this Mass, we conclude the first series of the Philippine Conference on New Evangelization 8 or PCNE 8. I thanked Fr. Jason Laguerta, the members of the PCNE executive board and the PCNE staff for working hard for this unprecedented in line, PCNE. Thank you to our guests who shared their ideas and experiences in the discussions. I also thanked those who participated in the three sessions of PCNE 8 series 1. Undeniably, PCNE 8 is itself a concrete experience of the new evangelization. Because the pandemic restricts us from gathering together physically for PCNE in the way that we used to, it does not mean that PCNE should be seized to be celebrated. The new evangelization calls us to look for creative ways for which we could still continue our mission even in challenging times.

It is very fitting that PCNE 8 dwells on synodality especially in the context of our Filipino culture and experience. PCNE 8 is a fitting segway to the synod on synodality and we celebrate this votive Mass of the Holy Spirit in union with the local churches all over the world to formally open the synodal journey in the Archdiocese of Manila.

On the evening of that first day of the week, these are the opening words of our gospel today. St. John brings us back to that first Easter Sunday when Jesus entered the darkness of his disciples’ fear and brought them peace, “As the father has sent me, so, I send you.” A few days before that, they abandoned him. A few hours before that, they could not believe he was risen. And yet, Jesus did not hesitate to entrust a mission to them. Receive the Holy Spirit – the spirit of forgiveness, the spirit of adoption as children of God, the spirit of the many gifts that build up the body of Christ – the Church. In the second reading, St. Paul enumerates the fruits of the spirit. We will lead them for our synodal journey.

Last Sunday, Pope Francis inaugurated the path that will lead to the 26th Ordinary General Assembly of the Synod of Bishops in October 2023. In a synodal assembly, the Holy Father confers with bishops chosen from different regions in the world to assist the Roman Pontiff with their counsel in safeguarding and increasing faith and morals and in preserving and strengthening ecclesiastical discipline and to consider questions concerning the churches activity in the world (Canon 342). It is an imminent exercise of ecclesial communion and episcopal collegiality. The synodal assembly is usually a three or four-week event in the Vatican. There are three phases: preparation, celebration and implementation.

In addition to the bishops, there are always some priests, religious and laypersons involved. There are even delegates from other churches and Christian communities. This time, however, the Holy Father wants to engage the whole church in the process of consultation and discernment. He wants the widest participation possible. I, therefore, call on all of you, the baptized in the Archdiocese of Manila to take part in this consultation no matter what your social, political, economic, cultural, intellectual, or spiritual affiliation or status is. Your perspective as well as your experience of God can be part of the synodal journey of the whole archdiocese. In God’s family, you have a voice and your voice counts.

Our consultations will involve not only those we call church people, those who are active in the different church groups, or those who are close to the church. We will listen to as many people as possible: to women, men, children, young people and elderly people in various contexts, those in the business sector and laborers especially the daily wage earners, government officials, the members of the LGBTQ+ community and the social media influencers to name a few.

We will also reach out to the people in the peripheries – ang mga kapatid nating mga nasa laylayan ng lipunan especially our poor and marginalized brothers and sisters. We will listen even to those who belong to other faith based communities and those who left the church. No matter how far you feel you are from the church or even from God, you have something to contribute. We want to listen to you. We want to journey with you. We want to discern God’s will with you. All these in keeping the theme of the synod, “For a Synodal Church: Communion, participation, mission.”

Yes, an essential part of the synodal process is listening. This strikes a chord in my heart. As you very well know, my episcopal motto is “Audiam” (I will listen). When I was installed as archbishop of Manila, I told you that I have really nothing new to bring to the archdiocese, but my commitment to be a listening shepherd to you, the flock entrusted to my care. I want to listen because it is only by listening that I can serve you well. It is only in listening that I could be a true shepherd who journeys with you and leads you to Jesus, our good shepherd.

As we embark on this synodal journey, I invite each one of you, each one to give value and time to listen. Our consultations will be no other than listening to each other’s stories of faith and experiences in life. For us in the Archdiocese of Manila, we translate the synod on synodality as Audiam sa RCAM. Let this be our tagline. Let this be the name of our journey. Halina at sama sama tayong mag-Audiam sa RCAM.

In this synodal path, we may feel overwhelmed, discouraged, or cynical. We know how difficult, tiring, and even…listening and discerning can be. It would be good, therefore, to consider that synodality may not be new to us. The Archdiocese of Manila has celebrated has four synods, each responding to the pressing concerns of each era. The first synod was convened in 1582, by the first bishop of Manila, Fray Domingo de Salazar, OP. It emphasized that the church’s commitment to evangelization included the defense of the right of the native Indios – our ancestors.

The Archdiocese of Manila also hosted the First Plenary Council of Manila in 1953 which was held in San Agustin Church here in Intramuros as well as the Second Plenary Council of the Philippines in 1991, in which we, the church in the Philippines put ourselves in a more active state of mission. New evangelization and conversion according to the image of Christian life and church model as a community of disciples. We committed to be a church of the poor where the poor equal to all others in Christian dignity, are not only evangelized but become evangelizers themselves where no one is so poor as to have nothing to get. And no one is rich is so rich as to have nothing to receive.

Let us not forget the Manila Archdiocesan General Pastoral Assembly or MAGPAS initiated by Cardinal Gaudencio Rosales, which led to the formulation of our Archdiocesan vision and the succeeding monthly gatherings to deepen our understanding of it. Those were also experiences of synodality.

From the council of Jerusalem in Acts 15 onwards, the church has manifested itself as synodal, journeying together as one communion gathering in liturgical assembly and taking an active part in evangelization. The Holy Spirit who walks in great councils and synods, is the same spirit in parish assemblies and BEC meetings. He is the same spirit who inspires us to promote the human family to humanize the social order and to care for our common home.

Finally, we recognize the church as synodal because God’s loving relationship with us is synodal. Jesus walked with his discouraged disciples to Emmaus until they recognize him in the breaking of the bread. Having heard the cry of these people, the Lord journeyed with them after they escaped slavery in Egypt until they reached the promised land. Even after Adam and Eve sinned, God walked in his garden and called out to them. Synodality is not only ecclesial but also theological.

We launched the synodal path in the Archdiocese of Manila in the year we marked the 500th anniversary of the first Easter Eucharist and the first Baptism in the Philippines. Let us entrust ourselves to our Blessed Mother and to St. Joseph.  The path of synodality is one of encounter – listening and discernment that finds its seed and its first fruit in the incarnation of the word. When our Lady replied to our angel, “Behold the handmade of the Lord, be it done unto me according to your word.” Like St. Joseph, let us humbly listen to what the Holy Spirit wishes to tell us and bravely go where the spirit leads us. Amen. (RCAM-AOC | Photo from PCNE Facebook Page) 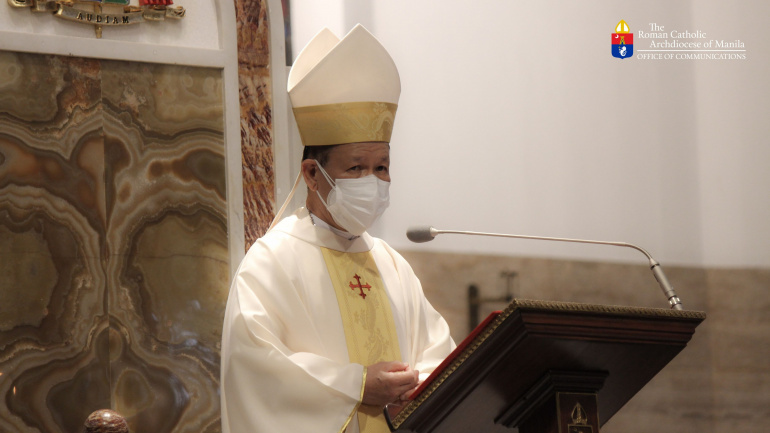 My dear brother priests, dearly beloved in Christ: We may a have lot of common with the widow in our first reading. We may not have undergone any dry spell or drought. But the pandemic also has brought us… 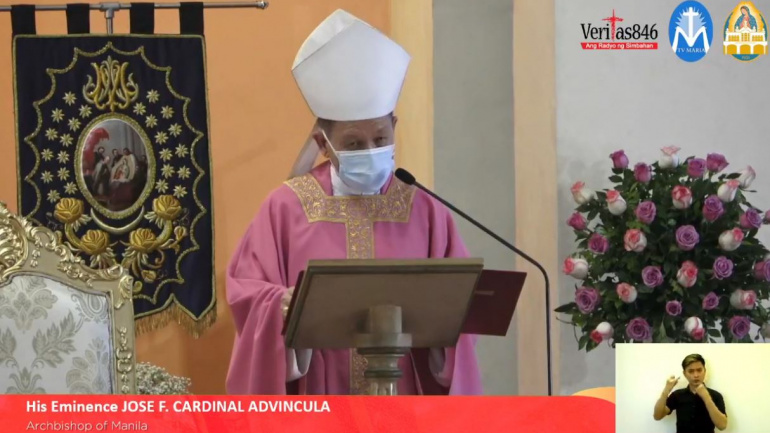 Fr. Eric Castro, our Rector and Parish Priest, my brother priests, civic and lay leaders of the parish, dear parishioners and devotees of Our Lady of Guadalupe and all those present here and those joining us via live streaming,…